Mushroom cultivation is big business and growing. This year output is expected to be around USD 16 billion, reaching $20 billion in 2025. Currently, it is a labour intensive business with staffing accounting for around a third of production costs, mostly pickers working inside the mushroom growing sheds, where the atmosphere is perfect for mushrooms but not ideal for people, working in cramped conditions between the racks of growing trays, with awkward, repetitive actions.

A new generation of mushroom production facilities, developed by Panbo Systems and a little help from FIN Framework, will be able to address this issue.  Panbo will be using robotics and hi-tech control systems to move pickers out of the growing areas and by doing so, increasing their productivity by over 300 per cent. At the heart of the new systems controlling the environment and monitoring mushroom growth is J2 Innovations’ FIN Framework, supplied to Panbo by OEM partner Air-TraXX under their Smart-TraXX brand.

“We are on the threshold of creating a new approach to mushroom production. Partnering with major retail and trading companies which are seeking to have their own production facilities, we now see typical projects as 40 million euros investments in 60 to 100 growing rooms, or 36,000 to 60,000 square metres of growing surface, where no humans will enter the growing areas except for cleaning. Using cameras to monitor growth and sophisticated robot vehicles that lift trays in and out of the growing racks for filling, picking and emptying. This makes the growing areas and picking very significantly more efficient with higher yields and lower costs.”
Niels Huibers, Director, Panbo Systems

Mushroom growing rooms need to have the temperature, humidity and CO2 gas concentrations adjusted during different stages of the growing cycle. This is handled by cameras monitoring the mushroom growth and controllers operating the HVAC systems. Both feed into FIN Framework software, which manages the atmosphere adjustments, databases and visualization.

“We have worked with FIN Framework for many years as it is reliable, adaptable, easy to program to suit our requirements and able to work with any controllers we specify for ventilation/climate control sensors, dampers and camera networks in each room”.

Edible mushrooms are consumed worldwide as valuable protein and energy sources and are considered healthy foods, being both low in calories and fat, and rich in proteins, minerals and dietary fibre. Bringing mushroom trays out to pickers now in a better environment makes for a happier and healthier workforce, who can pick more mushrooms per hour, moving typically from 30 kg per hour to 130 kg per hour, saving a third on costs when coupled with robots moving the trays around.

A prototype plant, complete with FIN Framework, has now completed its proving period and the first full scale partner farm is under construction.

Panbo Systems BV based in Beringe Netherlands has been involved in the mushroom business since it was founded in 1988, evolving from a plant component manufacturer to turnkey design and build to create mushroom farms across the world. 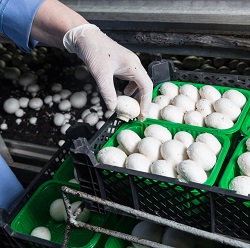