Welcome to the Media Center 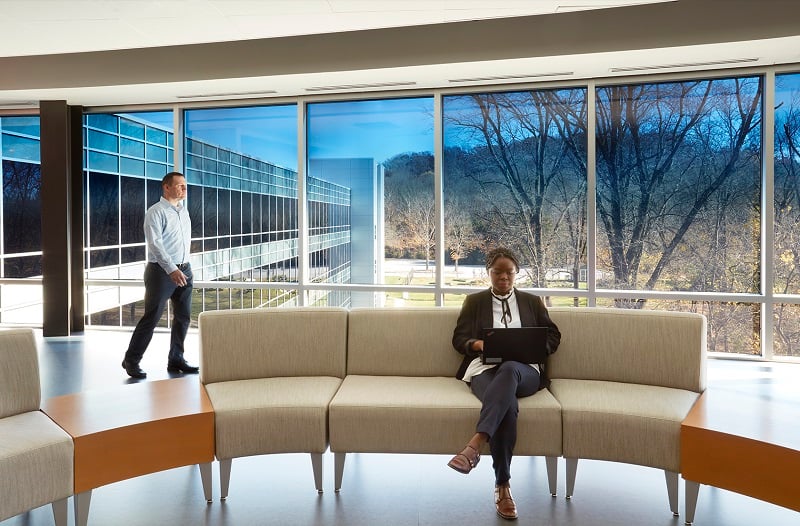 To create variable tint zones in a single pane of glass, a set of windows, or an entire building façade requires very smart technology. It’s possible to control the amount of light or heat gain that enters a space as the angle of the sun changes or the clouds break. Electrochromic glass created by SageGlass, a Saint-Gobain company, does all of this and more.

Windows play a major role in the aesthetics of modern architecture but are also key to the comfort and productivity of occupants and the energy efficiency of the building. To address all of these issues, SageGlass Harmony® provides the ability to create a seamless gradient from tint to clear within a single window. To provide this level of dynamic responsiveness, the project team created eight applications for SageGlass Maestro with an impressive number of features within each. A pane mapping feature enables users to drag and drop glass panes and assign them to a room, zone or building then set and update the properties of each pane individually or collectively. An events feature accommodates complex logic, taking data from hardware and sensors to set up logic workflows and schedules the glass to behave a certain way if a set of conditions are met (e.g. responding to sunrise and sunset timings plus weather conditions and occupancy to tint the glass accordingly). Even during the building design stage, SageGlass Maestro can take data from the panes of glass to be used in a project to create a PDF bill of materials.

J2 Innovations delivered a product that has a custom connector to bring in data and enable bi-directional communication between FIN Framework and SageGlass’ hardware and protocols. The Connector works seamlessly with the user interface wall touch panels, controllers interfacing with the glass, and the light sensor packages. This ensures that SageGlass Maestro can optimize and maximize the benefits of the glass at all times. Once the product was developed, the J2 team worked alongside SageGlass developers to train them on the new software product, ensuring that they had the correct tools and information to bring their training in-house and manage training themselves.

Alex Rohweder, CEO of J2 Innovations commented, “Working with such a prestigious product has been a pleasure. Whilst FIN Framework is used across the globe for many HVAC and smart building applications, the J2 team have shown how flexible the framework is by applying it to an impressively innovative smart building technology with a host of customizations. We are looking forward to continuing to work with SageGlass, supporting them on their glass revolution.”