Bringing Equip and Points from Niagara into FIN Stack

This week's video focuses on just how quick and easy it is to bring data from a Niagara station into your FIN Stack server. The video starts off by demonstrating how to connect Niagara to FINStack, using the nHaystackService (Niagara) and Haystack Connector (FIN Stack). Once the connection is established, bringing the data into FIN Stack is simple. How It works:
By utilizing the 'Add Haystack Equip' tool within the Haystack Connector, you can select multiple equipment folders from the Niagara Station to become haystack equipment. After the equipment folders are selected, the tool will prompt you to either create a new Site or select an existing one for the equipment to reference. As soon as you enter in a site name and press 'Apply', the tool automatically creates a new site, creates the Haystack equipment in Niagara, and adds a reference from the equip to the site. The only thing left for you to do is rebuild the cache, and drag the entire Site you just created into FIN Stack. Its really that easy! Pay off:
Using the Add Haystack Equip tool to bring in your Niagara data has many benefits, below are just a few. 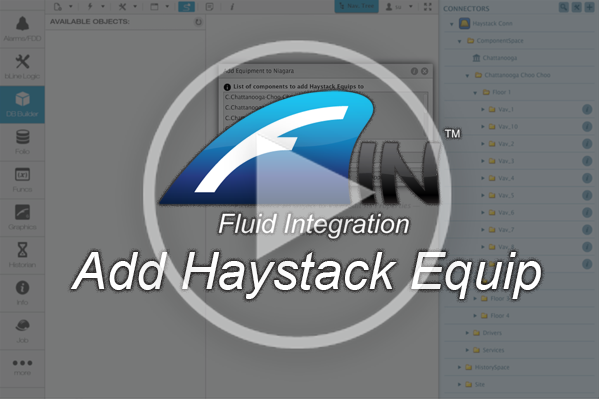 Chris has been with J2 Innovations for over 8 years and is an active part of the J2 Innovations Technical Support Team. Along with providing technical support, Chris also creates How-To-Videos, helps with licensing and orders, and provides a variety of professional services. Having hands-on experience with customer needs and the software itself has greatly contributed to the making of our J2 Innovations How-To-Videos.