The Strategy and Payoffs of Tagging

Value creation is happening in the buildings industry as OEMs, System Integrators, and End Users transition to an open, industry-standard methodology for meta-data tagging and data modeling. The BAS industry is re-working how data is leveraged across the entire design-construction-operations cycle; new applications that use tagged data are now being introduced and building owners are reaping financial rewards across familiar activities and through new services. Metcalfe’s Law is one way to predict how the value of technology is realized.

This observed rule of technology market behavior holds that the value of a network increases in proportion to the square of the number of connections. However, applying this to smart buildings and IoT devices doesn’t tell the whole story. Historically, it has required a large amount of manual configuration and integration effort to derive value from these devices and their applications. Here’s my theory:

Muench’s Corollary to Metcalfe’s Law - Network value equals the square of the number of connections divided by the number of mouse clicks that it takes to configure the devices. 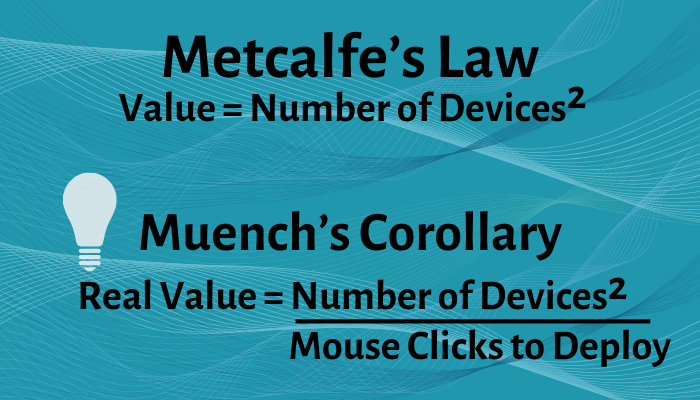 Traditionally, System Integrators are responsible for defining automation system points; yet, few of these professionals have ever wrangled with data semantics, metadata tagging, and taxonomies. Most have specialized in working on a single brand of building automation system (BAS) and have never encountered the issues that arise when you try to combine data from different sources and bring it into value-added applications. For example, a large college campus with many different BAS systems installed over many years could have dozens of ways to describe something as simple as its zone temperature. With Project-Haystack methodology and the right tools for automating the tagging process, systematic tagging and data modeling can be a straightforward job, even for a very large data set. Will the payoffs be worth the effort? Many times over.

Project Haystack is an established open source initiative whose mission is to provide the building automation industry and related IoT applications with a standardized way of defining the context and meaning of building related data. Project Haystack just released Haystack 4.0, which adds data-modeling features that support the implementation of both a taxonomy and the resulting ontologies that define the relationship of things and between things.

A popular implementation of open-source Project Haystack is nHaystack. This module enables Tridium Niagara stations (JACE and WebSupervisor) to serve Haystack data via a RESTful protocol. Using nHaystack, applications receive data complete with essential metadata descriptors. With a Haystack-tagged system, you can define tags once and realize value over and over again. nHaystack makes it easier for system integrators to add meaning to the Java-based Niagara component model.

There are numerous other implementations being worked on by the Project-Haystack community too. For example, there are groups working in C++ and DART. All share the common goal of making it easier to unlock value from the vast quantity of data being generated by the smart devices that permeate our homes, buildings, factories, and cities. They realize that the way forward starts with defining tags for the most common types of components and uses. The resulting self-describing models will pay off at the device, equipment and building-levels, as well as when they are shared by various applications for visualization, control, fault detection, analytics, maintenance ticketing, room scheduling, etc.

In the upcoming weeks, we are going to look at some practical examples of how tagging and data modeling is being used by the Haystack community in a variety of applications and use cases. Here’s a quick look at the seven payoffs.

Topics from this blog: Project Haystack